Here in my Thoughtworks project we wanted to try a new retrospective technique — just to give a little twist and stop things going stale.

So we decided to give a try and use the Six thinking Hats technique applied to retrospectives. The Six Thinking Hats - Wikipedia is a general-purpose technique for group discussion that helps the group to think in the same way during different stages, so it looks perfect for a retro :-)

I was the facilitator in this session, and grabbed some information from different sources to create my own tailored Six Thinking Hats session for my team. I used a whiteboard divided into six columns to represent the different hats states (view image)

The session went through the following steps: 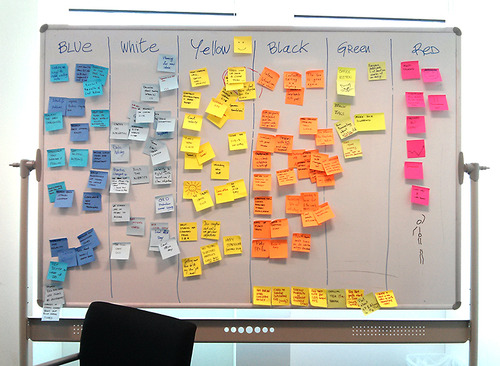 What about timing? To be honest, as this was the first time we run out of time :-(, so this session took more than 60 minutes. This was the timetable we had:

The feedback was very positive: people wrote more stickies than in other retros and they were also more motivated and focused during the session.

I used the following links:

This is the personal website of Ignacio Palomo Duarte, Product Manager . If you're looking for my portfolio and more information just have a look at the homepage, and if you like this article maybe you can consider sharing it on twitter.